So much has been happening but i have not had time to sit down and post...SOO i am going to do an update via pictures...


Just throwing in a recent picture of me :o)


The Bug has discovered Madeleines from Starbucks and he LOVES them 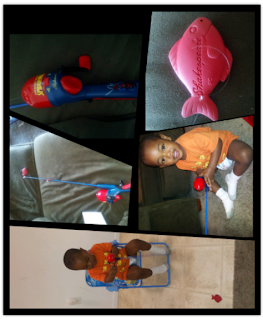 The Bug got a fishing pole (Blogspot wont let me change my picture direction so i will work on that for future, til then tilt your head!) Its so cute, it casts and reels and has a little fish that attaches at the end.  The bug has watched Grandpa enough times with his real poles, that when i opened the package the bug knew EXACTLY how to cast and reel...he will be catching us dinner in no time! 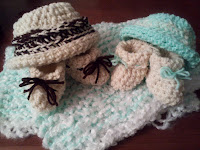 I have been crocheting a lot...just random i made these three things early in the month and this last week i have done three times the amount shown in this picture...just because. 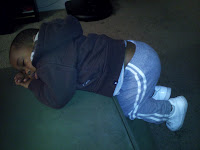 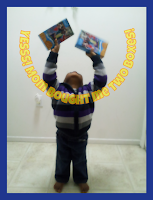 The Bug has been sleeping more, in random places at random times just knocks out like he has epilepsy LOL, i think we are approaching a growth spurt as we get closer to being a 3 year old

My Bug was excited that girl scout cookie season came so soon. He knew what he wanted and go enough for him to carry


We went to my nieces Disney character birthday party as the Incredibles because lets face it WE ARE PRETTY DARN INCREDIBLE! It was so much fun, my Bug slept soooo hard when we got home. 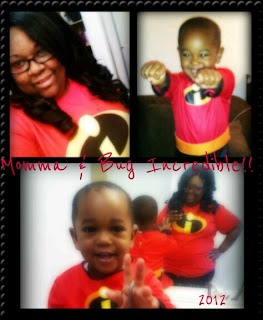 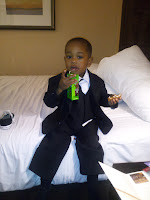 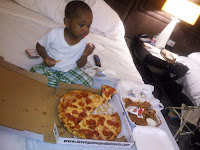 We went to Las Vegas as guests in a wedding.  It was so much fun. It was the Bugs first trip and he got all Vegas dressed up, walked with his Momma down the aisle preceding his Auntie, stayed up late, ate junk food and passed out at one point.  All in all it was a GREAT Vegas trip, especially for a first time trip! 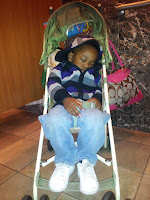 There has been a lot stuff in between all our excitement too here are a couple of funny milestones of progress:

1. We are still potty training and making PROGRESS! We can go to the pot and say potty when we have no bottoms on BUT you cant walk around life naked so its progress not complete.

2. We are learning to count although he when the Bug counts it goes like this " WAH, Two, Pive, Two Pive YAAAAAAY"....and when we say our alphabet it is " A B B E B Q B E"...again its progress.

3. We can hit a baseball off the tee, shoot the basketball in his hoop, kick a soccer ball consistently for about 30 feet, and throw and catch a football (throws under and over hand, and catches with two hands when u throw underhand to him)

One more month closer to being older and learning so much more about the world he lives in!

My niece Baby J is having her first birthday party and it is a dress as your favorite Disney character party, in short i am EXCITED.

My hunt started to get the Bug his first dress up costume!  Naturally i started at the Disney store which i thought was logical in hopes to buy a Disney costume for a little boy.  Well three Disney stores later i came to the conclusion Disney is sexist.  One fourth of all the stores we visited were princess dresses and none of them had one dress item for boys.  Its like they are setting boys up to think they can only play dress up in princess outfits.  The store had no Buzz Light year, no cars, and Disney just bought marvel comics (for all those who dont know) so you would think they would have a spider man costume right...yeah NOPE! I asked one of the sales associates in the first store if she had any boy dress costumes, thinking i had missed them, and she said " we have Woody's hat".  A Hat really lady...Cinderella has 5 different dresses and you offered me a cheap shiny plastic hat? Just dumb!

So after my hunt to buy in the store failed i went to my trusty old faithful acquaintances...Amazon and Google who answered all my  questions and fulfilled all my needs for less than $45.00. 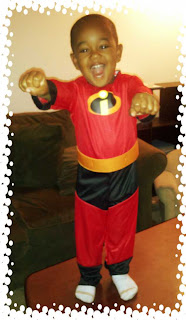 It was hard trying to think of what Disney characters to dress the Bug up as especially because i think the adults are dressing up as well.  I was going to dress up as snow white and then have the bug dress up as a dwarf, because that would have been CLASSIC, but the kid dwarf costumes had too many accessories.  My bug does not do extras right now, no hats (that don't serve to block the wind or keep his head warm in the cold), and no extras like Woody's gun holster.  It was challenge but i finally got a costume that works.  We are going to be the Incredible's because lets face it we are pretty daymn Incredible, corny i know but i like it!

My costume is make shift and not as elaborate as the Bugs, but we will look pretty awesome together dressed up...ya know while its still OK for mom to look cool with him. My Bugs costume came yesterday and although we have a couple weeks til the party, after trying on his costume i am even more excited to see all the kids having fun and dressed up on my nieces special day!
Posted by Unknown at 8:10 AM 2 comments: